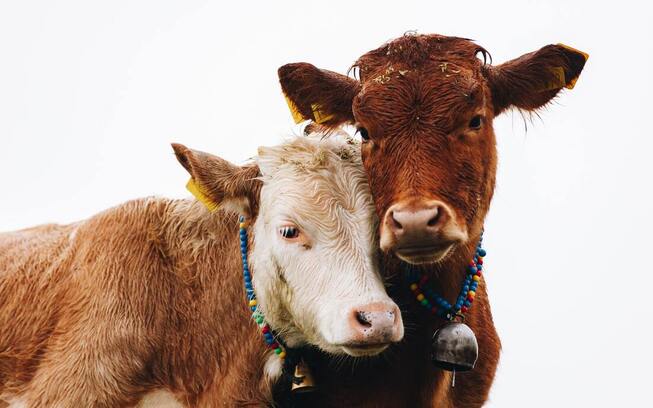 If you've ever enjoyed a glass of milk, an ice cream cone, a cheeseburger, or leather shoes, you should thank Allah for cattle!  Cattle is a word used to describe mammals such as cows, buffalo, bison, musk oxen, and yaks. This lesson will focus mostly on cows.

Cattle usually live in herds (groups). Cows are huge animals, so they like to have a lot of space to move around. They can be found on farms, ranches, roaming with their herders, and sometimes in the wild. Because cattle grow so big, they eat a lot of grass and drink a lot of water. This means they produce a lot of waste. This waste makes great fertilizer, which makes crops grow and produce a lot of food.

The stomachs of cows are separated into four (4) parts, called chambers. These chambers help cattle digest rough plants and grasses. Cattle swallow their food, then bring it back up to chew it and swallow it again. They do this until the food becomes easy to digest. Humans have one simple stomach which must digest everything we eat, so we must be gentle with it. The Honorable Elijah Muhammad teaches us to avoid eating certain plants like most beans and leaves. He said they are bad for our health and he was right! We don't have the right type of stomach to digest them! We are blessed to have a Messenger with such wisdom.

Each bull (male) usually mates with a number of cows (females). Cows usually give birth to one calf (baby) per year, but sometimes they have twins! The calves learn to walk a few minutes after birth. They must be able to follow the herd right away. It can be dangerous to get left behind. 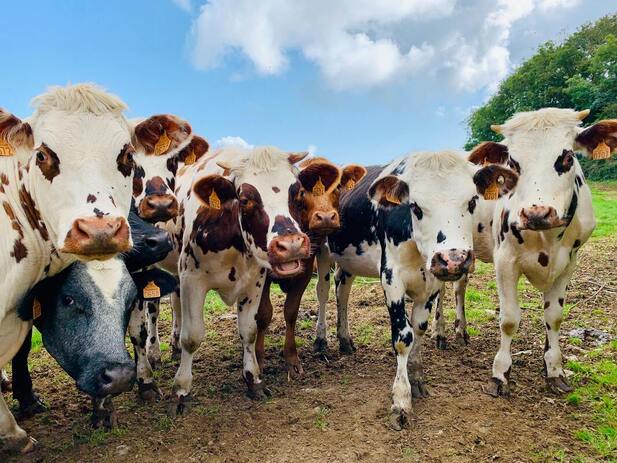 Cattle have been domesticated for many thousands of years. They are native to most parts of the world, although the species differ from place to place. Cows are important in many cultures, such as the Fulani, Masai, and Tutsi people in Africa. In Japan there is a fancy breed of cow called Wagyu that is popular for producing high-quality meat. Mongolians have been herders for ages, but climate change is making it hard to continue. Dzuds (summer droughts followed by very harsh winters in Mongolia) create a lack of grass for cows to eat. Some Hindus exceed the limit when it comes to cows. Unfortunately, foolish Hindus have been known to attack Muslims for eating beef because they think cows are "sacred".

Cattle are used for milk, meat, leather, fertilizer, and transport. They are also used as currency (money). For instance, cows are often given as a dowry (gift) to a bride or her family. Cows and their milk can be traded for other goods.  In many countries, people don't eat cow meat often because the milk is more valuable than the meat. You can only eat a cow once, but you can drink its milk for many, many years!

In places like Spain, Mexico, and the southwestern region of the United States, bulls are used for sport and play. You can find them being used in bullfights and rodeos. Some people believe that Spanish bullfights have a racist and anti-Islamic meaning. These cattle are not treated well. In Islam, we must treat our animals with kindness and respect.

Products Made From Cattle:

Can you think of any other products made from cattle?

The Christian people have one of the most brutal ways of killing animals for their food. Many of their animals are killed under fright and excitement; they actually murder the animals they eat.
We, the Muslims, who have not been able to go out to the slaughter houses as yet to choose our meat, as the Orthodox Jews are doing, slaughter our animals or cattle at a time when they least expect it. We take their lives in the name of Allah, with a prayer over this condemned life to be used to sustain our lives.
How to Eat to Live Book 1: Right Way to Eat (pg. 2)

Allah forbids us to eat peas. He considers most peas fit for cattle and herds of animals, but not for the delicate stomachs of human beings. No black-eyed peas. field peas, speckled peas, red peas or brown peas. Do not eat the split peas you find in the store.
How to Eat to Live Book 1: Vegetables (pg. 4)

If you must eat meat, always eat the cleanest, such as healthy and tuberculosis-free beef. The lamb is the best. Most beef is too coarse for our stomachs. The lamb is a much finer grained meat.
How to Eat to Live Book 1: Food God Suggests (pg. 11)

Milk and bread (wheat bread) alone will keep us alive indefinitely, and it is the best and most easily digested food.
How to Eat to Live Book 1: How Allah's Way Prolongs Life (pg. 27)

Whole milk that is clear of TB germs is best for us to drink. But, if we cannot get whole milk, we can drink the milk that the dairies have but we should boil it at a certain temperature in order to kill that probable germ.
How to Eat to Live Book 1: The Food and Its Eater (pg. 50)

Can you list three (3) reasons to be thankful to Allah for cattle?