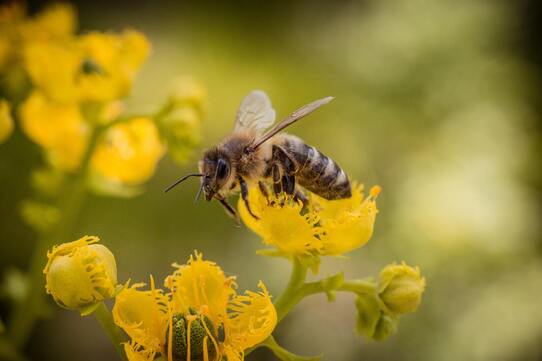 If you've ever enjoyed the taste of honey or the light from a candle, you should thank Allah for bees! Bees live throughout the earth, except on the icy continent of Antarctica. They can be found in wild hives or in a bee yard (a bee farm). There are around twenty thousand (20,000) varieties of bees! This lesson will focus mostly on honeybees.

Many bees are solitary; they live alone. Others, like honeybees, unite in colonies (groups). These colonies live in homes called hives. Female honeybees, called worker bees, fly around to different flowers. These flowers contain a sweet liquid called nectar. The bees suck up nectar and keep it in their crop (honey stomach). Bees use this extra stomach to turn the nectar into honey. Then, the honey is brought back up from their crop and passed to other bees. The honey is taken to its proper place and stored in the hive. At this point, it is still very runny. The bees flap their wings to help dry the honey until it thickens.

As the bees gather nectar, bits of pollen get stuck in their tiny hairs. Pollen is a fine yellow powder produced by flowers. Plants need pollen from each other to make seeds. The flowers can't go get it (smile). They need helpers to bring it to them. As bees travel from plant to plant, the pollen falls onto the flowers. This is called pollination. By pollinating plants, bees help them produce seeds. These seeds grow into many of our favorite foods. We'd be mighty hungry without the work of Allah's (God's) bees!

Male honeybees are called drones. Their job is to mate with the queen bee. A queen bee can lay 1,500 eggs every day. That's a lot of babies! The worker bees don't mate. They depend on the queen to reproduce enough bees for the colony. 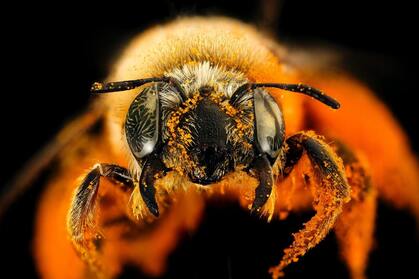 People around the world love honey. Some people keep bees in apiaries to harvest honey. Yet, other people climb high in trees just to take pieces of honeycomb from wild hives. Honey is not just a sweet treat. It is also a medicine. Best of all, honey doesn't spoil as long as it is stored properly. Bees work hard and produce many things that benefit us!

Royal jelly is the special food that queen bees eat. People use royal jelly to strengthen our bodies so we don't get sick. Bees collect propolis from tree buds. They use it to patch cracks and holes in their hives. We use propolis for healing many different sicknesses. Pollen and bee venom also have health benefits. Beeswax is used for making candles, crayons, coatings, and beauty products.

Products Made with the Help of Bees:

Can you think of any other products that can be made because of bees?

"Use honey, but not the whole bottle full at one time. If you have too much sugar in your blood, be careful not to eat any sugar of any kind until you get it out."
How to Eat to Live Book 1 - The Food and Its Eater (pg. 49)

Can you list three (3) reasons to be thankful to Allah for bees?

Teachings From the Holy Quran, Surah An-Nahl (The Bee)

Maulana Muhammad Ali:
16:68 And thy Lord revealed to the bee: Make hives in the mountains and in the trees and in what they build,
16:69 Then eat of all the fruits and walk in the ways of thy Lord submissively. There comes forth from their bellies a beverage of many hues, in which there is healing for men. Therein is surely a sign for a people who reflect.

Yusef Ali:
68. And thy Lord taught the Bee to build its cells in hills, on trees, and in (men’s) habitations ;
69. Then to eat of all the produce (of the earth), and find with skill the spacious paths of its Lord : there issues from within their bodies a drink of varying colours, wherein is healing for men : verily in this is a Sign for those who give thought.
What is the lesson in this verse?
Photo credits: Simon A. Eugster, Maša Sinreih in Valentina Vivod